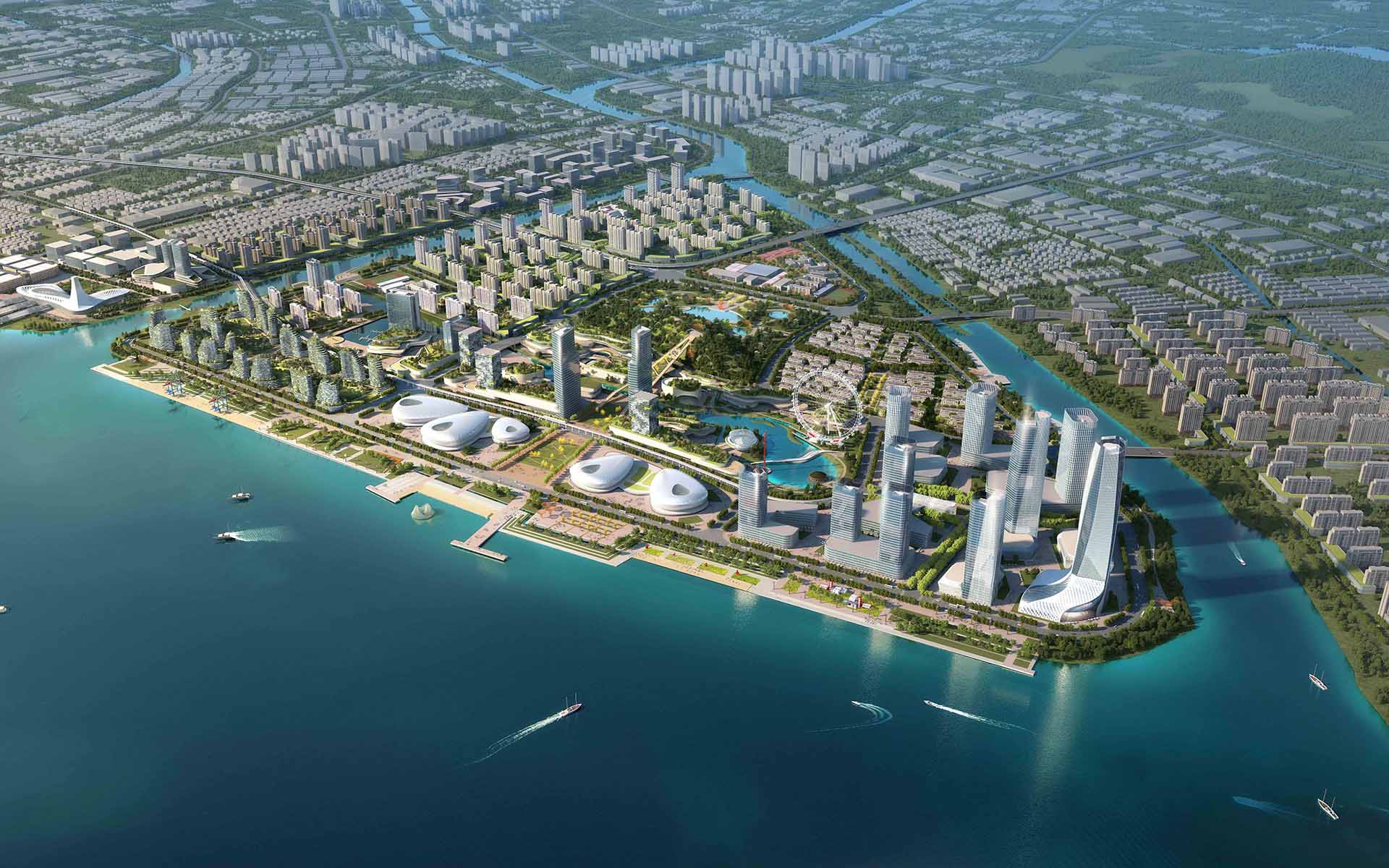 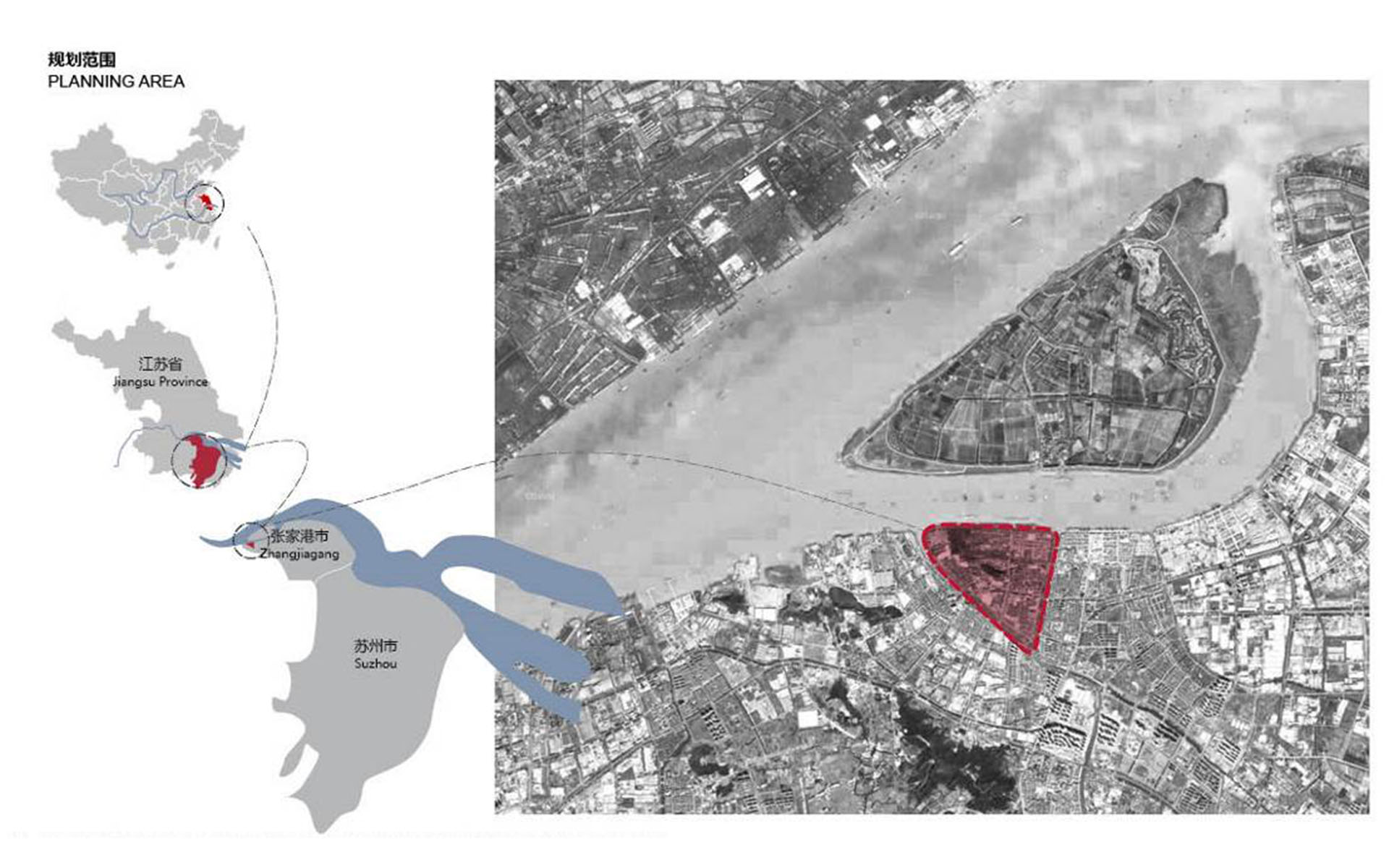 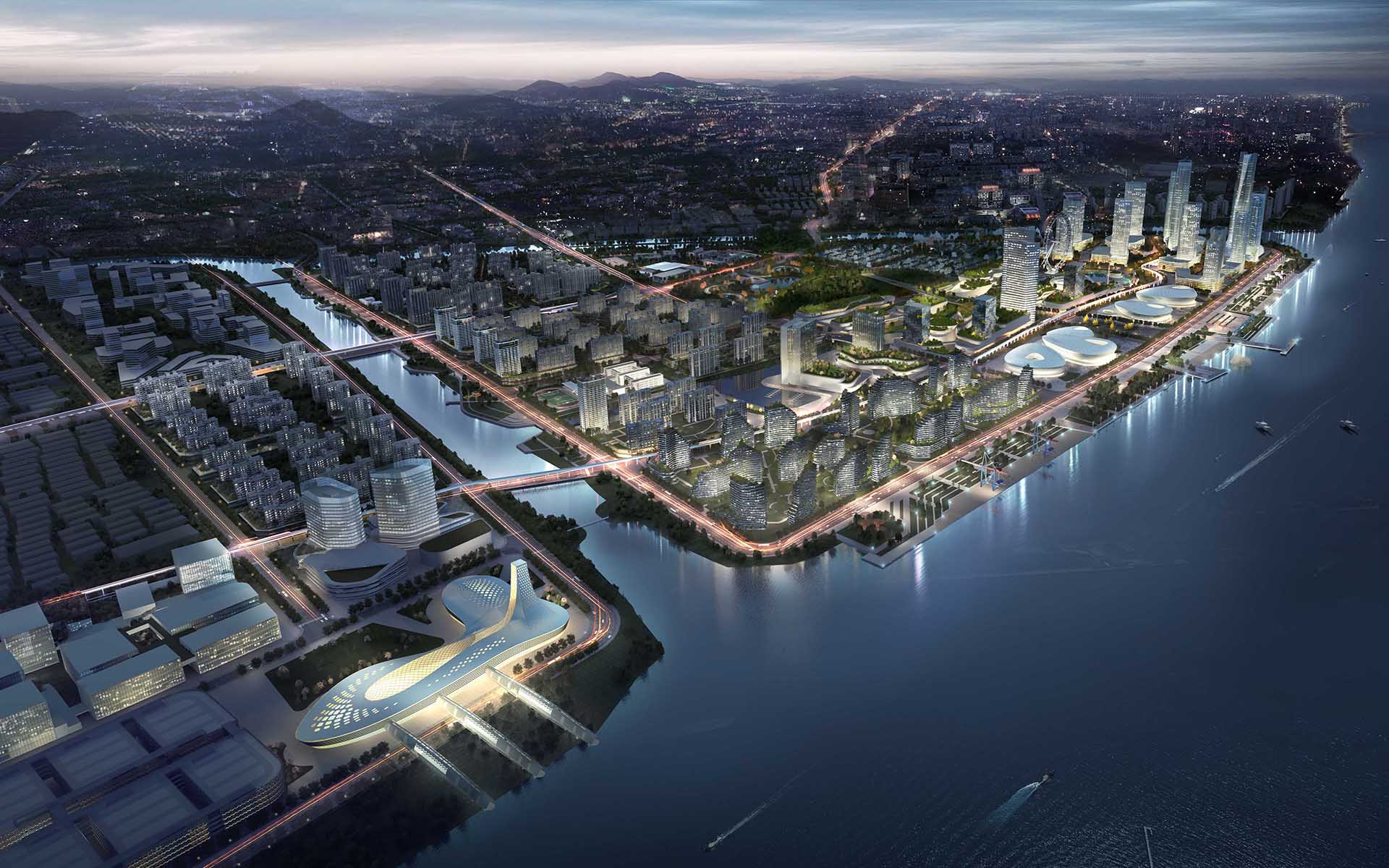 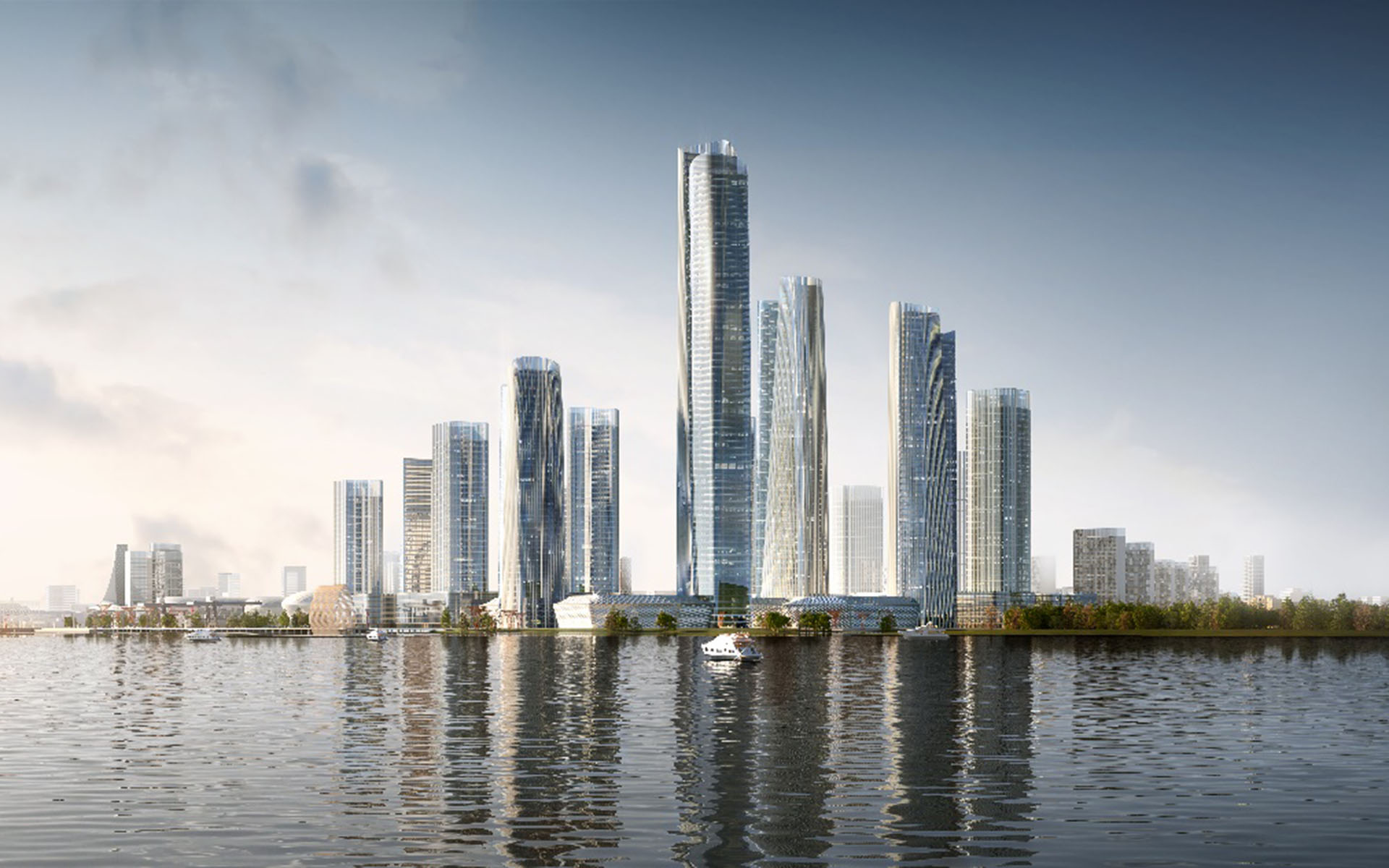 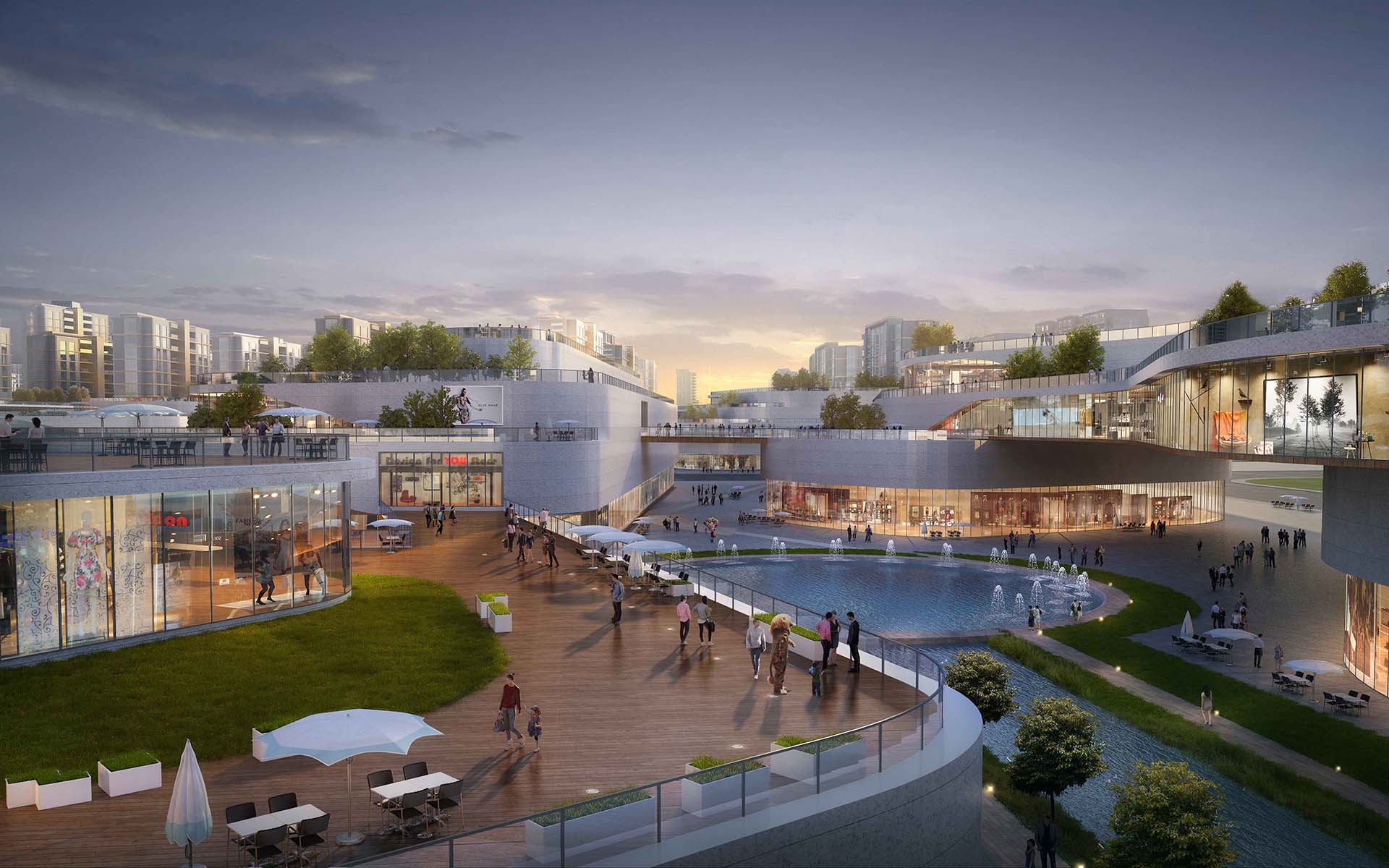 The site is located in the northwest of Zhangjiagang Bonded Area, surrounded by Yangtze River, Zhangjiagang River and Wushan Port. Implementing the national strategy of Yangtze River protection, the project aims to return port to the city. By making full use of the riverside resources, we plan to upgrade the city functions, and create an ecological smart city integrating port, industry and city. The planned area will shape a new image for the city, and serve as the “living room” of Zhangjiagang.

This project will build a comprehensive portal along the Yangtze River in Zhangjiagang, which integrates commerce, headquarters economy, tourism, urban recreation, and residential functions. With the development goal of integrating port, industry and city, we will introduce the strategy of Ferry Transit Oriented Development (FOD) and build a Central Activity Zone (CAZ) along the river, to help imporve the urban public service facilities and establish the city’s sub-center.

In the overall design of the project, the water will be diverted into the city, and the landscape will be built according to the water, the port, industry and city will be integrated. The overall planning structure is "three cores, two axes, one ring and multiple clusters". Three cores refer to the green core of Wushan, the core of Inner Harbor and the core of the lake. Two axes refer to the central landscape axis and the commercial water street axis; the ring consist of the "riverside cultural belt" along the Yangtze River interface, and the "riverside living belt" along the Wushan port and Zhangjiagang interface; and multiple clusters will enable complex urban fuctions.

Using the existing natural terrain of Wushan mountain, a comprehensive park will be build in the central area of the site to form the “community green core“; along the water system, a “public green core“ and a “inner harbour green core“ will be built on the east and west side respectively. Connecting the comprehensive park and the city balcony, there lies the “central landscape axis“. Along the water system within the site, there will be water-interactive commercial complex, themed shopping center, e-commerce experience center, themed hotels, waterfront catering, international Expo centrer, etc, forming the “connercial water street axis“. Along Yangtze River, Wushan Port and Zhangjiagang River waterfront interface, there will be three landscape axes forming a ring around the site.

The site will be devided into six units according to their main fuction: headquarters office unit, urban living-room unit, waterfront commercial unit, comprehensive park unit, waterfront recreation unit and livable waterfront unit. Headquarters office unit serves as the corporate headquarters, financial center and business center. Urban living-room Unit will contain two major buildings: Yangtze River Culture Museum and International Exhibition Center. In waterfront commercial unit, there will be coommercial center, outlets mall, hotels, e-commerce experience center, entertainment center, serviced apartment, and SOHO. In comprehensive park unit, there will be ten corporate featured clubs, which are open to the public. The buidlings sit in a beautiful scenary, while they are the scenary themselves. The livabale waterfront unit is equipped with residential building, schools, kindergartens, commercial facilities, community and other supporting facilities.

The combination of the flood control wall and the building created a parking space, making  the building more water-interactive and creating a high-quality urban waterfront space.